Last night was long, and very eventful for me! I slept for a total of maybe 3 hours (most of those being during the news this morning) but I did have some time last night to watch some things that I've had recorded on my DVR since we joined Direct TV (roughly 2010). One of those things was Eat Pray Love. Now, I am not a movie critic, and honestly everything seems much better as you ponder the great questions of life at 3am, but I really thought it was a pretty good movie. I know that there are plenty of critics, but it did have Julia Roberts in it, and I like her movies just because of her. I guess being sick has caught up with me (I couldn't lay down flat without coughing) but I think there have been other stressers on me such as the possibility of buying a new house, my baby going to kindergarten, having a baby (no I'm not pregnant) but if you know me just the possibility of the thought of possibly having another baby is a large step for me! And moving schools after feeling so comfortable where I am have all taken their tole on me! Anyway, there were a few things that I took away from this movie: 1. Choose your thoughts like you choose your clothes....now, in the daylight that thought doesn't have quite the same ring to it, but I still feel like it's pretty powerful, especially here in these next few months! Be specific in what you think, think positively, push out the negative 2. You want to get to the castle without going through the moat. Odd, but when you think about it, it's trying to get to the goal without going through the process, earning the prize without working to get there. Remember the first thing you bought with your own money? I do, it was a princess Barbie with a green gown, gold trim and a tiara and wand to match as well as shoes. It cost 11.99 and I had to save up almost 3 months which meant  cleaning toilets, mirrors, kitchen sinks and dusting the entire house to earn that money. When she was finally mine, nobody played with her, and nothing happened to her. I learned a valuable lesson there (shhh don't let my mom know!) that the prize with the work is so much more rewarding. As I pray and in my devotional time I feel like it all comes back to that, there isn't a "magical formula" man, we all wish there was! But as we swim across that moat to get to the castle we get stronger, (true, wetter as well and more uncomfortable) but we are more successful when we reach the castle. We shouldn't settle into complacency because it's comfortable, God doesn't want us to be comfortable, He wants us to be productive. And sadly sometimes for us, being productive is often times being uncomfortable. On a completely different note Parker had his first T-ball game of the season last night! They did great! 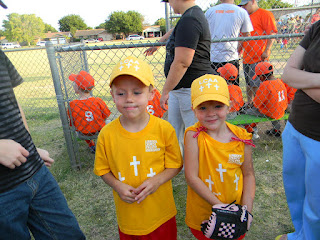